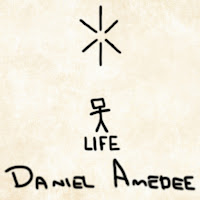 Daniel Amedee is living proof that a musician can be from New Orleans, but not necessarily be of New Orleans, a distinction that courses through his quirky, eccentric songwriting style, informed by a haunting bluesy vocalese that scratches the soul somewhere between Tom Waits and Captain Beefheart, and certainly belies Daniel’s 29 years. In fact, he’s been at it – writing and producing his own music (and getting by with a little help from his friends) since age 14. Which prompts the question: How and where did this unassuming bundle of talent come to be inhabited by the avant garde spirits of progressive rock and guerilla classical that suffuse his debut CD, Themes From (ExPat Records, 2011) and it’s follow-up Climbing (Arabella Music, 2013)? Which led to his EP Everything Will Change (2016) and what can we expect from his most recent EP Life set for release in August 2016?

For all its grand and storied heritage of America’s jazz, blues, rock ’n roll, Cajun, Zydeco, R&B, and hip-hop, the Crescent City can be a harsh and unforgiving mistress for a fledgling singer-songwriter-arranger whose music leans more towards the atmospherics of Billboard’s modern rock chart and U2. So when Hurricane Katrina hit New Orleans, soon after Daniel’s 18th birthday in 2005, Daniel took time to regroup with what little he had left and then moved to Cork City, Ireland.

While there Daniel met Colm O’ Herlihy who, with his brother Shane, fronted the well-known Cork band, Remma, signed to Morrissey’s Attack Records label. An immediate friendship was struck, and it wasn’t long before Daniel became Remma’s new bass player, a gig he held for the next three years. This turned out to be an incredibly crucial three years in Daniel’s development as a writer, performer, and producer. Over this time Daniel performed all over Ireland and England with Remma and recorded a five track EP Continue The Search with guitarist Noel Hogan (of The Cranberries).

When the band called it quits in 2010, Daniel travelled to San Francisco to begin recording his first album with producer Charles Gonzales. Drummer Patrick Spurgeon (of Rogue Wave) was onboard, a phenomenally accomplished musician in his own right. String arrangements were played by Charith Premawardhana, known for his work on Mars Volta’s breakthrough album, The Bedlam In Goliath, and as the founder of the Classical Revolution underground chamber music movement. Themes From… was the result. Available at CD Baby, iTunes, and SoundCloud.com, the album built a small but elite following, and a video was produced for track two, the five minute “Swimming Through the Unconscious Disconscience.” Another track was given away for free, “Solution.” Hendrik Schlimper of the blog Poule d’Or called the album “beautifully dreamy, very well produced and overall pretty enjoyable! A fitting warm summer evening soundtrack.”

Daniel returned to San Francisco in 2012 to record his second album Climbing with Charles Gonzales. Patrick Spurgeon returned to record percussion and they were joined by Sylvain Carton, saxophonist for the avante-garde dance band Beats Antique, on saxophone and clarinet. Hendrik from Poule d’Or had this to say, “So, I just had a bit of an intellectual attack and read Kerouac’s On The Road. Like, the whole book. Feeling vewy vewy sophisticated now. And just when I had finished the book, Daniel Amedee sent over an update with his new album. So then, in this Kerouac beat mindset, I hit play on it and the first listen couldn’t have been better. Although the book does more swing to the jazzy end of the music spectrum, I feel like Daniel’s husky voice and folk’ish tunes do fit the overall atmosphere of Sal Paradise and Dean Moriarty quite well. Being from New Orleans certainly adds to that vibe.”

After the release of Climbing in 2013, Daniel spent the two years touring the United States and Canada. He’s performed from LA to New York, from Vancouver to Montreal, and everywhere in between. When the time came to record a new record, Daniel settled in at a new studio in New Orleans, Record Office Records, built by his long time friend Michael O’Keefe in an old law office around the same 1978 Trident board Herb Alpert had with A&M Records in LA. The result was Everything Will Change, released on Feb. 2nd 2016 through Planetary Music Group. Daniel’s second EP Life, also recorded at Record Office Records with O’Keefe, is set for release this August through Planetary Music Group and Record Office Records / Saguna Records. Daniel will also be touring the US and Canada through the end of this year with his band Daniel Amedee & Gold Light.