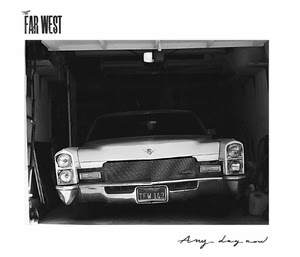 Los Angeles’ The Far West came together in 2010, thanks in part to a Craigslist ad featuring nothing but a link to a live clip of Waylon Jennings on YouTube.  Each of the five members left other bands for a common goal: to make music inspired by artists such as Gram Parsons, Uncle Tupelo, Son Volt, and The Band. They released their self-titled debut album in 2010. Before long the band partnered with respected booking agent Mongrel Music, and have been consistently growing and selling out shows in the West ever since.Their second album, Any Day Now, is out February 25, 2014 on Medina River Records and is steeped in alt-country with a few flourishes.

Their debut in 2010 immediately attracted attention. “The Far West bring LA’s signature Gram-Parsons-style country rock together with the type of honky tonk that is unmistakably Texan,” said Turnstyled Junkpiled. “But whatever it is they play, The Far West exceed in coming together to produce a distinct sound that is undeniably their own.”

Any Day Now stays close to the roots of their inspiration. The album kicks off with “On The Road,” written by vocalist and guitarist Lee Briante from the Hudson Valley. Driven by train-beat drums and haunting Leslie organ, "It's about my perception of Hollywood after moving here," says Briante. "It’s a place of self-created identities and it may certainly seem like people out here think they are the next big thing, but there's a bigger Tinsel Town ethos and mythology at play.”

But not everything has a roadhouse sound. “Leonard,” about the folk-artist who built the famed Salvation Mountain in the California desert, includes horns. "You can definitely hear the influence of songs like 'Minnie the Moocher' here," says Briante, "but this arrangement is also influenced by Springsteen’s Seegar Sessions, and some of Levon Helm’s horn treatments.” The band called on Nic Chaffee, who added the warm and vibrant brass.

“The Bright Side” has a little more kick reminiscent of The Old 97s with excellent picking on guitar by Aaron Bakker. Writer Robert Black (bass, mandolin, vocals) says, “We all take our little trips to the dark side from time to time. ‘The Bright Side’ is your fist-in-the-air anthem for those days when you wish the rest of the world would just ‘f--k off’ already.”

“The song ‘Wichita’ is about the journey back to a certain time and place when I was a kid,” says Black. The band decided to give the title something of a double-meaning and, in keeping with the Midwestern theme, they pay respects to some of their favorite music from the region including Son Volt, Wilco and of course The Jayhawks on this song -- a deliberate homage.

Black backed many a band in his home state of Texas as well as groups from the across the country. Briante, from New York state, has played in dozens of bands since he was a teen, and found Black in LA via the sparse Waylon Jennings Craigslist ad. James Williams has lent his keys to several acts over the years and has performed live on KCRW's Morning Becomes Eclectic with Nic Harcourt. Chicago native Aaron Bakker (guitars, vocals) found his true passion for music when he picked up his first guitar at fourteen. He was an integral part the Chicago outfit Dorian Taj, and dozens of others.Travis Popichak has been a hotly sought-after drummer in Los Angeles for years.

This is producer Colin McLean's second album with The Far West. He recorded their first album at an American Legion Post while the bar was open for business – and, in keeping with his interest in using unusual spaces, recorded Any Day Now in a vintage hot rod repair shop. “The room you use to record really makes an imprint on the overall sound of a record, so using places that have lives of their own adds something special I think,” says McLean. The album’s title, Any Day Now, was borrowed from an article on the band that asserted expectantly, "A follow up album is due any day now." That was over a year ago, and any day now has finally come.