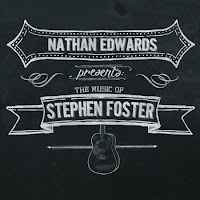 The Music of Stephen Foster
by Nathan Edwards

Stephen Foster has earned his reputation as the "Father of American Music" by writing and composing songs that have endured for over 150 years. Although many of his songs are still widely recognized today, Foster has a deep catalog of work that reveals his longing and sorrow, yet also a sense of hopefulness.

Having known the song "Hard Times Come Again No More" for many years, I began commonly playing it as a closer to my acoustic sets. My fondness for this song inspired me to research further into both Foster's catalog, and the man behind the music.

What I discovered was a deep catalog of work that revealed some notable cultural differences between then and now. Even so, it is remarkable how seamlessly many of his songs were able to translate into a modern folk setting.

Through careful selection, I decided on eight of Foster's songs that I reinterpreted and recorded for a modern audience. My hope is that listeners of this album will discover a newfound appreciation for Foster's music, and that his timeless songwriting will continue to endure.

Raised in Wisconsin and residing in eastern South Dakota, Nathan Edwards is an acoustic folk and electroacoustic musician who enjoys crafting emotion through musical textures, both acoustic and electronic.
Email ThisBlogThis!Share to TwitterShare to FacebookShare to Pinterest