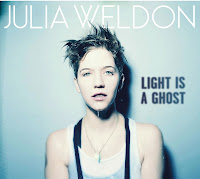 Light Is A Ghost; the follow up to Julia Weldon's 2008 self-titled debut, is produced by Saul MacWilliams (Ingrid Michaelson, Dan Romer) and features Adam Christgau (Sia, Tegan and Sara) on drums.
Defined by its brash honesty, Light Is A Ghost is an American album in the truest sense, capturing the feel of the open road on a late summer evening and making room for the remnants of past relationships that creep into the serenity. Amidst the harsh city edges and limitless, open spaces, Weldon’s lyrics depict love as a battlefield littered with casualties – loss, regret, resentment, and debauchery. Weldon's confident guitar playing and Christgau’s propulsive drumming set Light Is A Ghost apart.

Weldon's own version of twang offers many pop inflections in the way she hangs her vocal stylings around a chorus or in the quirky, daring arrangements offered on the twelve track collection. This original hybrid of indie folk is best heard on songs like “Careful in the Dark” “Meadow,” and “You Never Know.” Light Is A Ghost draws on everything from contemporary indie folk to classic blues rock, dialoguing with contemporary artists like Bon Iver, Iron and Wine, and Cat Power as well as legends like Bob Dylan, Elliott Smith and Suzanne Vega. MacWilliams’ production is deft with acute attention to details, a tasteful complement to Weldon's tales.