Steve Cooke's Workforce Anthem "Working for the USA" Out Now! 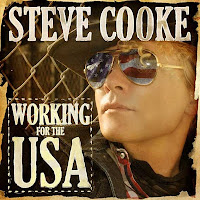 Here comes a true modern day Americana Rock troubadour, whose song "Working for the USA" is a call to arms for the countries workforce's to unite for a better America. Steve Cooke's workingman lyrics are powerful, sincere and with a social conscience that harks back to the original folk pioneers of the labor movement, Woody Guthrie and Pete Seeger. The tracks musical and vocal performance is reminiscent of John Mellencamp, Bruce Springsteen and Bon Jovi.

With his 12-string acoustic guitar leading the charge, pedal steel and steaming electric guitar rock riffs, he is creating a unique sound with the idea that if we all work hard, talk about freedom, love, peace and god; we can make a better life for our families and ourselves.

Written and produced by Steve Cooke "Working for the USA" was officially released on Labor Day to observe the 130th anniversary of the labor movement.
"I believe its every Americans right to have a job, the President just committed to preserving the 'collective bargaining rights' of workers in his Labor Day proclamation and that was always the key to building the greatest middle class the world has ever known. I hope my song reminds the public of that again", says Cooke.With jobs for America being a hot election issue, "Working for the USA" sounds like the needed anthem for any politician who wants to solve the unemployment problems.
Email ThisBlogThis!Share to TwitterShare to FacebookShare to Pinterest