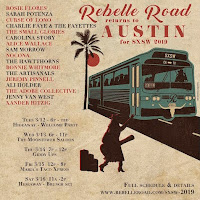 Rebelle Road, the California-based entertainment company dedicated to amplifying women and showcasing the depth of talent across the country/roots genre has announced multiple events in Austin, Texas the week of March 11-15.  Venues including Hideaway Kitchen & Bar, Moontower Saloon, Giddy Ups and Maria’s Taco Xpress are all hosting artists under the Rebelle Road banner representing a broad range of musical traditions. All events are free and open to the public.

“In 2018, we launched our female-fronted company in Austin with a strong lineup of women; we held multiple events over the year and worked with so many people who were also focused on increasing visibility for female artists,” the trio stated. “So much has now changed and we feel the timing is right to show that equity is possible and also that country music exists everywhere - not just in one part of the United States.”

The release of studies by the Annenberg Inclusion Initiative, combined with widely reported media reports on the disparity for women on country radio, at venues and festivals and in the recording studio has created a tidal response that was evident during the recent Grammy Awards.  Female artists, executives and those involved in making music have all banded together to create progressive change through programs including She Is the Music, She Said So, Make It Equal, and others.

“Rebelle Road is part of this movement to seek equality for women, as well as working for those ‘rebels’ who are making music across the country,” the founders stated.  “Just as we’re based in California and want people to know about the history and legacy for country music here, Texas and other places across the world have their own roots traditions and sounds.”

Rebelle Road is a Los Angeles-based entertainment company founded by industry executive Karen Rappaport McHugh, along with Americana artists KP Hawthorn and Adrienne Isom. Dedicated to exploring the female point of view and bolstering American sounds in country music, the company is developing a concert series, podcast, boutique festival and Film/TV properties. “Women’s contributions in all aspects of Western life have been minimized and our goal is to bring these untold stories forward, particularly as they impact music,” they stated.