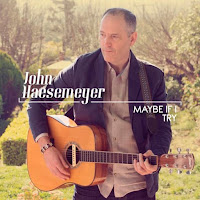 Recorded on both sides of the equator, Americana/Rock artist, John Haesemeyer's new EP, Maybe If I Try, will be released on April 29, 2017. John Haesemeyer (HAZE-mire) is a San Francisco based performing artist who fuses folk and pop genres, emphasizing intimate vocals, acoustic guitar, orchestral instruments, and the rhythm section of a rock band.

Argentinian producer, Nahuel Bronzini arranged the record, instilling a range of American rock, country, and folk influences, coupled with the classical traditions honed in his formal training. Bronzini is a popular producer and string arranger in the Bay Area, and produced John's last two records.

Haesemeyer and Bronzini collaborated with musicians from the Mar del Plata Philharmonic Orchestra near Buenos Aires, Argentina, and with local players from the SF Bay Area music scene. Andrew Laubacher - on break from touring at such national venues as Austin City Limits, South by Southwest, and The Apollo (with band Con Brio) - plays drums on the record. French American bassist, Schuyler Karr, recently graduated from the renowned SF Conservatory of Music, plays electric and upright acoustic bass.

Haesemeyer discusses the message of the record. “The album is about perseverance. It's for everyone out there who sees the world changing and the cards being stacked against them. Despite it all, we can't give up on our aspirations or lose sight of what makes us human.”

This sentiment is summarized lyrically in the title track's chorus: “Maybe if I try a little harder, I might get what I want.” Musically, the message is conveyed by the honesty of the folksinger's voice supported by the soulfulness of a female vocalist, the nobility of a brass section, and the dynamism of an electric guitar that enters in the bridge.

“For me personally,” Haesemeyer explains, “perseverance is about pressing ahead despite the challenges of making independent music year in and year out.” Haesemeyer quit his corporate job in 2012 to dedicate himself full time to music.

Building on this theme, Bronzini emphasizes the effort and determination put into producing the songs themselves. “John and I spent countless hours in pre-production debating how to structure and arrange the songs in a way that presents their natural qualities, while creating an engaging and re-defining experience for the listener.”

Haesemeyer adds, “In terms of composition, I wanted to make it easy for listeners to open up to the music so I put specific emphasis on melody: the lead vocal, the guitar riffs, the piano fills... I wanted the listener to walk away humming and at the same time be touched by the lyrics.”

The EP was mastered by Piper Payne, President of the SF Recording Academy (Grammys) chapter. Her work allows the energy of the songs to punch through while allowing the Americana and classical components to bring depth to the mixes. The EP's photography is by photo journalist Max Bouvatte (of the San Francisco Chronicle), whose stark images of the Oakland Ghost Ship fire last December led the front pages of newspapers across the nation.

WHAT'S NEXT
In support of his new release, Haesemeyer and his band plan to perform at various venues in the Bay Area. The artist also just wrapped a music video working with Chilean director Andrés Gallegos, an award winning grad student at SFSU Film School. The music video (for the title track, “Maybe If I Try”) tells the story of a local aerialist Xochitl Sosa (trained by Cirrque de Soleil and other circus artists) as she struggles to master her craft. Haesemeyer and his band members appear in the video to provide musical support.

In closing John has this to impart: “I appreciate your listening to my music and hope it helps you reflect on what is important in your life. If my music touches you, send me a message on social media or come to a show. Hearing from listeners keeps me motivated and inspired!”

BIOGRAPHY
Growing up in the 80's and 90's in the American Midwest, Haesemeyer found sanctuary in the music of the singer-songwriters who came before him. He found their music gave him a way to reflect on life: his parents' alcoholism, the closets he found himself in, and his struggles to express himself artistically. In making music, Haesemeyer's goal is to create a similar experience for his listeners - exploring the themes of loss, love, and hope that are common to the human experience.

Haesemeyer recorded his first studio record in 2013 (Come Along Quickly) in San Francisco's historic Hyde Street Studios where such iconic artists as Crosby, Stills, Nash and Young, Jefferson Airplane, and Van Morrison recorded many of their hits in the 1960's and 70's. In 2015, Haesemeyer released his second record (Three Mirrors) collaborating with such notable artists as Levi Seacer, former guitarist of Prince; and Leah Tysse, winner of Billboard's best R&B Song, 2007.

haesemeyer.com
Email ThisBlogThis!Share to TwitterShare to FacebookShare to Pinterest