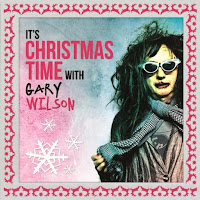 The King of Weird, the Master of Low-Fi Funk, Gary Wilson is out to make Christmas a little kookier this year! He’s written an entire album of Christmas-themed tunes with all new stories of forlorn lovers and tearstained heartbreak, all set to Wilson’s trademark Casio-infused freak-funk that has made him a favorite of everyone from Beck to Earl Sweatshirt. It’s Christmas Time With Gary Wilson is just about the best stocking stuffer any underground music fan could hope for!

Gary Wilson is known the world over for his unique–yet highly palatable–brand of experimental music. Though he achieved enduring cult status in 1977 with his classic album, You Think You Really Know Me, he had been recording original music since his pre-teen years, and even studying composition privately with John Cage. Wilson has performed live at venues and festivals throughout the world, including CBGB, the Fonda Theatre, and recently at the Desert Daze festival in Joshua Tree. He has also performed on Late Night with Jimmy Fallon and Jimmy Kimmel Live! Earl Sweatshirt sampled Gary’s “You Were Too Good To Be True” for his song “Grief,” and Gary’s music was also recently featured in an episode of Narcos.

Recognized as an innovator not only in the realm of home-recorded music, but also in the worlds of performance and aesthetics, Gary was featured in the Metropolitan Museum of Art’s 2013 exhibition, PUNK: Chaos to Couture, which included his appearance in The New York Times. In recent years, Gary has shared billing with Foxygen, Ariel Pink, R. Stevie Moore, Black Lips, and Dan Deacon to name a few, and he is the subject of the documentary, You Think You Really Know Me: the Gary Wilson Story.


It's Christmas Time With Gary Wilson