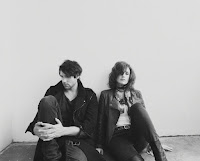 London-born, indie folk sibling duo The Luck is pleased to announce the release of their new live video of "Holding On" from their debut EP, True North. The acoustic video was filmed in California's Runyon Canyon and premiered with Songwriting Magazine, who calls the tune "crisp and affecting".

Max and Esmay’s shared passion for music permeated their lives from an early age, finding inspiration from the sounds of Fleetwood Mac, Simon & Garfunkel, and The Cranberries. As children, they both sang in choirs and learned to play an array of instruments, including cello, harp, piano, guitar and bass. In 2011, after blending their individual talents and becoming The Luck, the duo captivated crowds at hundreds of shows around the UK and Europe before heading to California to write, record, and perform in 2014. Since arriving in the new sun-soaked surroundings of Los Angeles, the duo have also incorporated the Laurel Canyon acoustic guitar-driven sounds of Joni Mitchell and The Eagles into their music. This new video for "Holding On" is set in the Runyon Canyon because they "wanted to find somewhere calm and tranquil up there to capture an unplugged one-take performance of this song – when we found that spot, it just made sense.” says Max.

Now in the United States, The Luck continues to enthrall audiences with the same energy and unique blend of their sibling harmonies as their performances abroad. In the past two years, The Luck has entertained fans at legendary West Coast venues including The Troubador, Hotel Cafe, and the Viper Room, as well as street performances in San Francisco and Los Angeles. This past summer, The Luck captured the spontaneity of their live sound through “Live at Dave’s Room,” a live video series recorded by Grammy Award-winner David Bianco (Tom Petty, Bob Dylan, Tracy Chapman). The two recently released their debut EP, True North, alongside Paul Broucek, President of Music at Warner Brothers Pictures, and three-time Grammy Award-winning engineer/mixer, Ed Cherney (The Rolling Stones, Bonnie Raitt, Eric Clapton).

Check out The Luck’s new acoustic video "Holding On" from their debut EP, True North.


To learn more about The Luck, visit TheLuckMusic.com