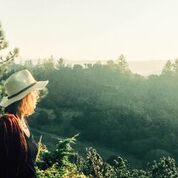 When the dulcimer starts in on Dreaming Place, the first look at H. C. Love's upcoming album, you're instantly transported. Inspired by the Australian aboriginal concept of Dreamtime, the song takes on an inner journey worthy of its title. Dreaming Place is a call to enter Dreamtime, a land out of time where one would be receptive to visions and stories of the land. Sonically, there's a little bit of retro 90's throwback as if the essence of Jewel and Joanna Newsom combined to create something new yet just as lovely and heartfelt.


Set to be released on November 4th is Light Breaks, Love’s introspective and ethereal sophomore album. The conceptual record has been a non-linear process and years in the making. It was inspired not only by the poetry of Shelly, Tagore and Rilke, but also by Love’s own contemplations and personal experiences. Blue Butterfly, for example, was born from her observations of a butterfly in a garden, while the song Child of Light was born out of her grandmother’s passing.

Working in an improvisational spirit, Love also added some field recordings from her walks in the forested Land of Medicine Buddha. Later in post-production, she worked with Christopher Hedge (best known for his soundscapes and award winning film scores) at The Magic Shop to add layers of additional recordings of the ocean, a drone cello, percussion and lap steel guitar to selected mixes.


While being from a family of professional musicians, H.C. Love somehow never made the connection for herself to music in that way. As a child, she studied classical piano until she was 12, played the flute in orchestra, and wrote her first piano piece at the age of 8. It would be a number of years later however, in her twenties, when she would return to music. It was at this time that she began to slowly find her voice. And it was only after the passing of a beloved great aunt, which moved her to write a song at a newly purchased upright piano, that she began to explore an approach to music that helped her access a more intuitive, improvisational approach.​