Angie and the Deserters return with the title-track, “You” from their New EP! 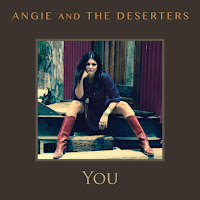 With their edgy style and entrancing vocals, Angie and the Deserters charmed listeners with their latest summer EP, titled Blood Like Wine.  The band is now ready to showcase to the world a continuum to their Nashville recordings.

Already announcing a brand new single and EP “You,” Angie and the Deserters prove they are not going anywhere anytime soon. Produced by Jeff Huskins (Keith Urban, Carrie Underwood), the single is filled with soring pain as Angie Bruyere highlights a time of realization in a withering relationship. The recurring secrets, the hidden thoughts can no longer continue as she delivers, “got to move on without you.” Bruyere’s chilling vocals are followed by enticing violins that bring brightness to this awakening.

“You” was written while I was touring with the London Quireboys in England. I was on the tour bus driving though the English countryside, and wrote it one long night with Guy Griffin about what was going on back home in Los Angeles,” Angie recalls.

The band’s latest releases have received some honorable recognition. Angie and the Deserters most recent single “The Gift” debuted on Radio Indie Alliance’s charts at #1 the first week of its release. “The Gift” also reached # 4 on The Alternate Root’s Top Ten Songs of the Week.

In addition, the band’s “Country Radio” music video reached over 32K views on Facebook and YouTube! The band also received phenomenal reviews from The Daily Country, No Depression, The Alternate Root and more! “This is as good as it gets in the genre, a raw-throated and well played shot of hopped up rockabilly that defies you to stand still. It’s infused with an added intelligence that helps strengthen the band’s overall presentation” says, Gas House Radio. The band’s new single, “You” is expected to receive a considerable amount of attention as well.