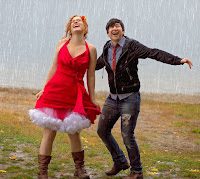 Americana duo Mouths of Babes release the track “Lock & Key,” from their upcoming full-length album, Brighter In The Dark, due out in early 2017. Comprised of Ingrid Elizabeth and Tylan Greenstein of acclaimed acts Coyote Grace and Girlyman, the now-married pair has received notable press both for their respective projects and together as Mouths of Babes; just last year MTV covered their wedding as an inspirational story celebrating marriage equality.

Both women grew up under the musical influence of famed family members. The Tony- and Grammy-winning musical Dreamgirls, which debuted the year Ingrid was born, was written by her great uncle Tom Eyen. The musical inspired Ingrid’s brassy vocal styling and her passion for performing. MTV.com notes, “The depth of emotion found in [Mouths of Babes’] lyrics is reminiscent of all that’s moving about Dreamgirls.” Similarly, Ty’s acoustic songwriter sensibility can be traced back to her father, Ron Greenstein, who is well known in folk music circles for singing and playing bass in The Chad Mitchell Trio, a 60’s era harmony group originally featuring John Denver.

Ty and Ingrid met when Coyote Grace and Girlyman toured together throughout 2011 and 2012 (both groups went off the road in 2013). In 2014, the pair participated in a challenge called “Real Women Real Songs,” writing one song per week for a whole year. With the resulting trove of material they launched Mouths of Babes in late 2014 and released their debut EP, Faith & Fumes.

Mouths of Babes will be releasing material from Brighter In The Dark throughout the coming months, with an eclectic arsenal of songs that showcases their knack for fusing blues, folk, and soul with poetic lyrics. Stay tuned for more news from this duo.