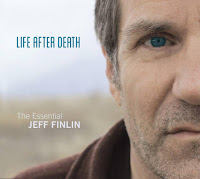 Rising from the ashes of the self- a voice appears. Though the voice has been there all along it’s been muffled by the sound of a train that carries the load of youth, ambition, want and a lust for more.  Once that train stops rolling it reveals its musings. This voice ruminates in the work of Jeff Finlin.

Jeff Finlin’s work is funny, insightful, playfully sardonic, and capable of exhuming archetypal musings from its listeners. It documents a vivacious spiritual path in poetry and song.  In this respect, Finlin’s work represents a kind of modern day American Rumi-ism.

New album ‘Life After Death’ is somewhat of a ‘best of’ or ‘an introduction to’, featuring 20 key tracks for those who have not crossed paths with this maverick and prolific songwriter. Spanning his back catalogue, this collection seeks to show the depth and diversity of Finlin’s composition, creating a full picture of him in 2016.

Born in Cleveland, Ohio, the grandson of Irish railroad workers (who seemed to be in the habit of leaping from trains), music, writing and travel became fascination for Finlin. He began with a wanderlust, traveling America using every form of transportation, with the exception of tuk tuk  (still on the bucket list). Having played in bands in Boston, Ohio and L.A, he finally wound up in Nashville with long-time mate and Academy Award nominee Gwil Owen to form the rock band The Thieves.  They released the acclaimed ‘Seduced By Money’, produced by Marshall Crenshaw on Capitol Records. Venturing out on his own he went on to produce the self-released ‘Lonely Light’ before going on to produce the Little Dog/ Mercury release, ‘Highway Diaries’.

Never one for the convention of Nashville, he moved to the far west of America and set up shop. For the last 12 years he has been delivering writing and music of depth and candor that has consistently made its appearance around the world.  His song “Sugar Blue” found its way into Cameron Crowe’s feature film “Elizabethtown” alongside the likes of Tom Petty, Elton John, Lyndsey Buckingham and My Morning Jacket.  This new compilation of his work from brand new West London based label Man In The Moon Records represents a distinctive core of his music and poetic thought.

Sober since 1997, Finlin took up the practice of yoga to enhance and promote his spiritual life.  His resulting work documents a spiritual path of experience that became the main focus and structure of his art and life. He recently began work on a foundation called Recover.Yoga with the hopes of giving back the practice of yoga to people in all forms of recovery. Jeff has also just released a new book of poetry which will probably blow a few minds alongside his prosaic music, it’s entitled ‘The Seduction Of Radha’.

Jeff Finlin has always carved out his own path. Tune into “Life after Death”—you’ll hear an elusive magic.