‘The Cost Of Everything And The Value Of Nothing’ is the fifth studio album from Matt Cox set to be released July 15, 2016 on Sower Records. 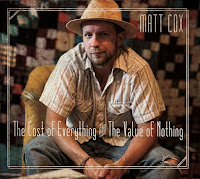 The self-produced album was recorded live on December 19, 2015 at Hidden Tracks Recording Studio, in Omaha, Nebraska by Jeremy Garrett and mastered by Doug Van Sloan at Focus Mastering. The performances, featuring longtime friends Colin Duckworth (pedal steel, guitars, mandolin), Vern Fergesen (accordion, piano), and Josh Dunwoody (upright bass), are a nearly untouched portrayal of what the songs would sound like in a live setting, or living room, with no use of scratch tracks and very few overdubs. The mood is steeped in old time traditions of American roots music with tracks “Jumpin' River Blues,” “Little Lucy,” and “Nighttime Drifter” highlighting Cox’s abilities as a slide guitarist as well as his signature harmonica style, while stripped-back works like “Drama Queen” and “The Charcoal Grill Song” offer a more introspective glimpse at the songwriter’s personal life.

Now a six-time Omaha Entertainment and Arts Award winner for Best Country/Americana and Best Blues, the caliber of artist Matt Cox has become in the studio and on stage is being recognized regionally, and across the nation. Cox continues to play shows with an ever-changing lineup of the area’s top talent and a raw energy that reveals the passion and experience that friends share with each other on stage and off.