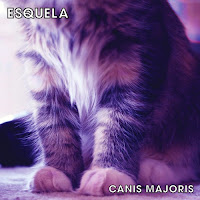 Brimming with confidence and charisma, Esquela roars to life with their
third release Canis Majoris. From the opening strains of the doo-wop inspired “It Didn’t Take” to the closing cover of the Blue Mountain classic “Blue Canoe,” this five-piece outfit from rural Upstate New York finds its musical roots embedded deep in the grit of rural America. You’ll hear songs of love and loss, a stinging critique of our unique brand of American greed, and even a musical retelling of one of the most infamous games in baseball history. Together they form the backbone of a stirring work from a band who’s found its footing.

What began in 2010 as an informal writing partnership between John “Chico” Finn and Keith Christopher (Dan Baird & Homemade Sin, Billy Joe Shaver, Todd Snider, etc.) soon transformed into a recording project, and with the addition of vocalist Becca Frame, Esquela was born. That first self-released album, The Owl Has Landed, was followed by 2013’s Are We Rolling, produced by the legendary Eric "Roscoe" Ambel (Ryan Adams, Steve Earle, Joan Jett & the Blackhearts, etc.). Along the way, guitarists Brian Shafer and Matt Woodin and drummer Todd Russell joined John and Becca in the studio and onstage. Throughout years of performing and recording together, the sparking chemistry within Esquela has grown, as has their confidence in one another.

Canis Majoris marks a tidal shift in the band’s approach to songwriting. Previous releases found bassist and vocalist John “Chico” Finn taking on primary songwriting responsibilities with collaborator Keith Christopher. This time around, John came with the ideas and the rest of the band added their own creative input and arrangements. Nowhere is this more evident than in “Sorry,” Esquela’s take on the motives of a cheating romantic partner. As John presented his idea for the song, Becca expressed her belief that the scorned lover’s voice badly needed to be heard. The result is a call and response song, reminiscent of the musical dialogue in classic 1950’s and 60’s country and western. Benefiting again from producer Eric Ambel’s master touch, these Americana tunes mark Esquela’s emergence as a player in the genre.

The album title is multilayered in meaning. Canis Majoris is one of the biggest stars known to mankind, so naming the album after it is meant to be facetious. We’re not the biggest band known to mankind. I have also been called “Big Dog,” so it relates to the Latin translation. The title’s relation to “big dog” contrasts with the album cover, which features a cat too big to fit in the space.

In the end, Esquela is a band filled with performers, and performing is what they love most. Their shows are rousing and spirited trips through their own music and the music of their idols. Over the years Esquela has shared the stage with artists like The Bottle Rockets, Dan Baird & Homemade Sin, Whitey Morgan and the 78’s, Marah, Jason Ringenberg, Frog Holler, Gutterball, and Eric “Roscoe” Ambel. Most recently, the band competed in and won first place in The Playoffs at the Rock and Roll Hall of Fame in Cleveland.