INTRODUCING ELOUISE AND THE BIRTH OF BLACKGRASS 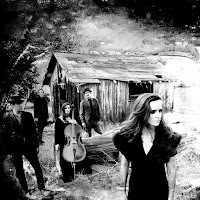 Elouise composes in the round, calling upon raw emotion and a seasoned stable of musicians whose experience ranges from classical, rock, bluegrass and folk, to create songs that sometimes depart from traditional song structure leading to deviant musical inroads.

Lead vocalist, Elouise Walker hails from a photography and art direction background and pulls the band together to recount visions and imagery using an unusual musical pallete creating a sound that is both gnarled and beautiful…. simultaneously polished and tarnished.

John Chamberlin, a longtime musician, engineer and producer has co written and produced Elouise Deep Water. Calling on years of experience in many genres of the music world and his knowledge of film and television score. In addition to writing, playing and producing, he is also currently a re recording mixer on Orange is the New Black, Portlandia, and numerous other television shows.

The band has a rich history of music and accompanies that with a visually dramatic American Gothic look that helps them to marry the stories with the sound. Rich Dembowski was the frontman and songwriter for popular cosmic country band, Old Californio, as well as playing for many years with famed producer and musician, Ben Vaughn. He has also musically directed several theatre productions. Michelle Beauchesne has a classical music background and has performed with the Florida Philarmonic, Berkeley Symphony, and Bolshoi Ballet (amongst other groups). William Bongiovanni has recorded or played with Ann Magnuson, Rufus Wainright, and the Santa Monica Symphony and now almost exclusively plays double bass. John Philip Shanale has contributed to many television shows as a composer, arranger and keyboardist and has been associated with several Grammy nominations (including albums by John Hyatt, Buddy Guy and Jane’s Addiction).

To check out their sound and to download “Silent Night” visit them on soundcloud:
https://soundcloud.com/user-481899170  and for more information:  http://landslidesound.com/about-elouise/