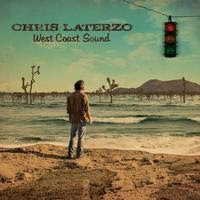 Los Angeles based singer-songwriter and recording artist Chris Laterzo has managed to keep the muse alive with the release of his fifth and latest album West Coast Sound. Blending varying degrees of folk, rock, and alt- country, Laterzo is an artist who continues to create a unique style of song best described as American cowboy-rock. The spirit of the open road, the imagery of boundless landscapes and weathered travelers, the loping rhythms- as with Laterzo’s previous work, it’s all there in West Coast Sound.
Laterzo spends a great deal of time supporting his indie albums on the DIY touring circuit both solo and with his band Buffalo Robe, covering various parts of the US, and across the Atlantic to Europe. The core of Buffalo Robe is Laterzo-- lead vox, acoustic guitar, electric guitar, harmonica; Jeff LeGore—bass, background vocals; Dan Wistrom- electric guitar, pedal steel, acoustic guitar, background vocals; and Ron Pak—drums. Along with this seasoned group on West Coast Sound, Laterzo included many guest musicians from the burgeoning Los Angeles Americana scene; Bret Jensen- electric guitar/ John Bird and Paul Inman- piano/ Rami Jaffee- B3 organ/ Jesse Greene- violin/ Rachel Dean, Jen Gibbons, Devon Rowland- background vocals and Justin Smith and Denny Weston, Jr adding drums. Co-produced by Jeff LeGore and Chris Laterzo, West Coast Sound is a culmination of a seasoned artist dedicated to the craft of songwriting.

The title track, “West Coast Sound” kicks it off and was written by Laterzo after he came to terms with being an Angeleno. “Although my hometown is Denver and I still consider Colorado ‘home’, I also grew up in Brussels, Belgium and Boston, MA.” he laughs, “I now live in Los Angeles- and have for, oh my- how long did I say I was going to be here?” “Tumbleweed” is just that, a song about being on the road, rootless and where the wind takes you. “There ain’t no use in fixin’ To domesticate/ Or put a handle on a nomadic trait.”

“Echo Park” marks a change in the artists life—“ I still visualize sitting in the back room of my Echo Park house staring up at the near vertical backyard,” said Laterzo “Not only was the geography vastly different from Venice Beach, but my lifestyle had taken a turn- living with my girlfriend and having a kid.”

The 8-song album ends with “Chaperone” which Laterzo said was inspired by a dream. “ I was visioning walking through past scenes of my life as if in a gallery and the thought that maybe having a chaperone/guide along the way would be fitting.”

Laterzo’s first three albums, American River (1997), Waterking (2002) and Driftwood (2004) found him experimenting with sounds from rock to folk and finding his signature sound which led Performing Songwriter Magazine to describe him as “a gifted melodist with an ear for hooks that sink in more deeply with each listen” and “...a worthy figure in a lineage that includes Neil Young and Gram Parsons.”

Laterzo’s fourth album, Juniper & Pinion (also co-produced by Laterzo and LeGore) established him firmly as an Americana rocker to be reckoned with. Without losing that cowboy rock trademark, West Coast Sound has more of an air of ease about its production and is a much more concise album. Laterzo explains, “This record I wanted the listener to be able to get in and out of the songs- and the album as a whole- in one breath. That’s one of the reasons I kept it to eight tunes and under 35 minutes. I write songs that I feel good about, and when I record them, I try to produce them in a manner where the production doesn’t become the song.”

With what has been described as his “sweet So-Cal drawl and confessional melodies” Laterzo has the ability to articulate things both moving and straightforward, which makes you realize he is a singer with an observant mind and a big heart.

Already a contender on the California music scene, this new record reaffirms that Chris Laterzo and West Coast Sound can compete with the best of Americana sounds nationwide.