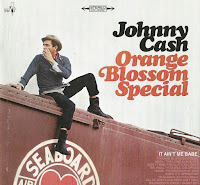 The 'Box Car Series' is so called because the back of each album of this limited edition pressing contains a tiny replica of the actual Orange Blossom Special box car that partly appears on the album cover. Each box car has been strategically foil-stamped with a unique Limited Edition number.

Johnny Cash was known throughout the world as one of the major figures of post-Hank Williams country music, he constantly sought to expand his musical horizons and avoid being pigeonholed. Cash was at his most engagingly eclectic on this early ‘60s recording of Orange Blossom Special. To begin with, "The Man In Black" covered three tunes by Bob Dylan, then the most talked-about young singer-songwriter of the dawning folk-rock era. ("It Ain't Me Babe," "Don't Think Twice, It's Alright," and "Mama, You've Been On My Mind"), Nashville's essentially conservative musical establishment hardly embraced Dylan's mind-blowing lyrics, but Cash, knowing genius when he heard it, was the first major country star to cover Dylan's work. By the same token, he also included two numbers by A.P. Carter of the legendary Carter Family, who, along with Jimmy Rodgers, created the musical template that's still the model for "traditional" country, bluegrass, and some forms of folk. And Cash's unmistakable, tough-hewn baritone rendered the classic fiddle tune that is the title track, and Harland Howard’s,"The Wall," one of the prison songs for which he is known, "Danny Boy" (with a spoken word intro), the spiritual "Amen" and the time-honored story-song "The Long Black Veil." Cash's songwriting contributions include “You Wild Colorado” and the ever-relevant protest tune "All Of God's Children Ain't Free."

Orange Blossom Special finds Cash backed by the Tennessee Two, his outstanding guitar/bass tandem of Luther Perkins and Marshall Grant. And there are guest appearances by such distinguished Nashville names as tenor saxophonist Boots Randolph, pianists Floyd Cramer and Bill Pursell, guitarist Norman Blake, and harmonica ace Charlie McCoy. And June Carter joined Johnny on "It Ain’t Me Babe" for the first of many classic duet recordings they would make together over the years.

The Orange Blossom Special album by Johnny Cash is one more example of the fine music being produced by the budding Hollywood record company, Exhibit Records. The young music label has curated an eclectic catalog of classic recordings in a short time and continues to gain high praise and recognition for their exquisite mastering, high quality pressings and attention to details as displayed in the fine art and craftsmanship of their exceptional package design.


Exhibit Records
Email ThisBlogThis!Share to TwitterShare to FacebookShare to Pinterest