Leah Capelle is an award-winning Singer-Songwriter from Chicago. Described as a young Stevie Nicks/Joni Mitchell, though her music is uniquely her own, Leah also gains inspiration from the likes of Sara Bareilles, Ingrid Michaelson, Regina Spektor as well as friends and family. As many of her songs are about personal experiences, she accredits all her hard work to those around her.
Leah began piano lessons at six years old, was writing songs by eight, and started professional voice lessons with Janice Pantazelos, founder and Master Coach of the Chicago Studio of Professional Singing at age ten. At thirteen, she began to perform live in and around Chicago and Northern Wisconsin whilst learning guitar at The North Shore Music Institute, and by sixteen was being booked regularly for paid gigs. Since then, Capelle has continued performing at well-known venues in the USA, including The Double Door, The Metro, The Elbo Room in Chicago, Hotel Café in Los Angeles, The Hotel Utah in San Francisco, The Stork Club in Oakland, Shine in Sacramento and many more.
From 2013-2014, Leah attended Berklee College of Music in Boston where she was a dual major in Professional Music (focus in Songwriting and Performance) and Music Business. She developed a love for the music business in an intro class taught by Professor George Howard (TuneCore). Leah left Berklee on the Dean's List and moved to the West Coast to work on her music full time.
Currently living in Los Angeles, Capelle recorded her freshman EP with Grammy winning producer Jeff Bova (Celine Dion, Blondie). Other projects include collaborations with Pete DiStefano (Porno for Pyros, Lance Herbstrong), Rob Lewis (Jason Mraz, Mary J Blige) and others. Following a tour with her live band around the Bay Area of California in December 2014, Leah performed with them at SXSW in March of this year where her shows included four Captiva/SpringBreakATX showcases. 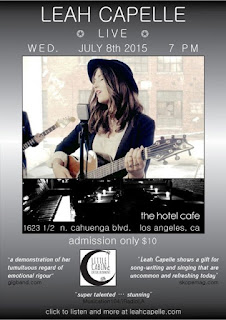