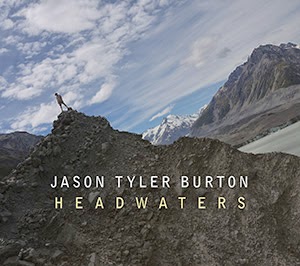 In the woods, just across the Kentucky River from Daniel Boone’s fort, a boy leaves his log cabin home and follows the path of a creek running through his family’s land. Descended from a long line of Kentucky natives, the boy is a young Jason Tyler Burton and he is searching for the spring that is the source of Calloway Creek. This search for the source of things has driven him throughout his life, now culminating in the release of the aptly-named HEADWATERS, Burton’s second original full-length album. In 2007, he and his wife ventured west from Kentucky to the Utah wilderness, leaving behind the security of a career in higher education, sensing a desire “to take some risks and live a better story,” living out of their van and working with the National Park Service. The idea for the album came to him while searching for the source of the Green River in the mountains of Wyoming, recalling his childhood pastime. The songs on Headwaters were born out of the stories he encountered while living this nomadic life in the heart of the American West, stories about the search for meaning and belonging.


From a young age Burton learned the fiddle, his love of music growing as he did. Raised in a religious family, music was mostly limited to hymns and old folk songs, but he’d occasionally sneak off to listen to the local rock station on his radio cassette deck. Burton says he knew, from growing up singing in church, that there was something powerful about music, but it was upon hearing Paul Simon’s Graceland as a teenager that he realized that music could really inspire people with rhythm, poeticism, and story. It had all the “raw emotion and power of those hymns,” says Burton. “[That] was the first time I truly realized that music could be so much more than a pop song.” A song can resonate with something much deeper than the listener’s ear. It can tell a bigger story. On Headwaters, this sense of resonance runs deep. The songs ring “true” in the way a carpenter fits one angle to another with precision and skilled detail. Burton’s guitar, mandolin, banjo, and harmonica, lay a sonic foundation of true Americana, and his lyrics put a finger on the pulse of contemporary America. He also incorporates elements like David Tate’s electric guitar, washy and open, swelling like storm clouds on the horizon. Ryan Tilby’s dobro and Steve Lemmon’s percussion make it clear these songs flow from the heart of a true Kentuckian. Strings from Jessika Soli Bartlett and Lynsey Shelar and vocals from Katy Taylor fuse these sounds with the lyrical rhythm and poetry of personal stories with such depth and honesty that you could play them in almost any genre or age and they would still feel at home.


Jason Tyler Burton sits alongside the pantheon of artists and storytellers possessed by the landscape and story of the untamed American wilderness (think Ansel Adams, John Muir, and contemporaries Wendell Berry and David James Duncan). With HEADWATERS, he invites you into the belief that a song can do more than tell just a story. It can help navigate the thick and foreboding wilderness of the soul John Muir referred to in saying, “I wish I knew where I was going. Doomed to be carried of the spirit into the wilderness, I suppose. I wish I could be more moderate in my desires, but I cannot, and so there is no rest.”