She's been Boston's singing sweetheart for the past few years as part of Sarah Borges & the Broken Singles. But, now, the singer-songwriter is claiming that title of her own as she readies the release of her new solo record, Radio Sweetheart.

The 10-track album, set for release on June 24 via Booneville, Kentucky-based Lonesome Day Records, is a return to self for the artist. "I wrote songs that felt important to me. Before, I had a lot of co-writes, so a lot of opinions in the mix, and this time I was able to think of just what I wanted. It was scary and freeing at the same time," says Borges, who Rolling Stone magazine describes as "friendly pop–rock with bits of twang, rockabilly, and '50 pop."

One song in particular, "Radio Sweetheart," was a track that always held a special place in her musical heart, but never had a home until now. "I wrote that song when I was really young, just out of college. For me, it was this version of my childhood self and very personal — it just didn't feel right to record with the Broken Singles. But, now, it means a lot to have it on my new record," says the Taunton, Mass.-born artist. 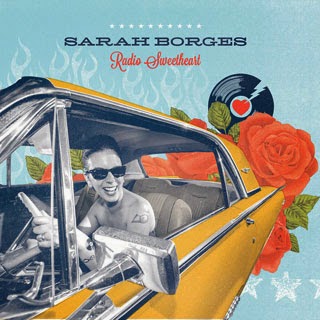 Radio Sweetheart was the perfect title of her new album as well as it represents her newfound optimism as she embarks on a solo career. "I titled the album Radio Sweetheart out of hopefulness about this record. I decided to call myself the radio sweetheart in hope that it comes true," she admits.

The album was recorded at Woolly Mammoth Sound, which is owned by Dave Minehan, singer/guitarist of Boston rockers Neighborhoods as well as guitar player for the Replacements. Minehan also engineered the album while Steve Berlin, who played saxophone and keyboards with Los Lobos for 30 years, produced the record, which features a few very special guests — NRBQ's Terry Adams and Lone Justice's Ryan Hedgecock.

"I'm a huge fan of NRBQ and we sort of checked a chord from their song, 'Ridin' in My Car' on my song, 'The Waiting and the Worry.' So it was an honor to have their piano player Terry Adams play on it. When I'm writing songs I always like to think of how it'll play live and this is one I really like to perform. It makes people happy. Lyrically, it tells the story of a girl driving in the car, listening to music, and thinking about a boy," she says.

Another standout track is "Record on Repeat," which was written with another special guest — Ryan Hedgecock of Lone Justice. "This is the closest to the live show out of the all of the songs. It has lots of energy. I went over to Ryan's house when I was out in L.A. one night. His band, Lone Justice, was instrumental in mixing punk and country, and I am so enamored of them and him. We drank some tequila and ended up writing this song that's just a vignette of a rock and roll; fast girl and guy get together in a burst of flames, personified in the record they can't stop listening to. It was a really fun and natural writing experience," she says.

Along with her famous friends, her fans helped Radio Sweetheart along as well. "We did a crowd-funding campaign and within one month, I received more than 150 percent of the money I needed. I couldn't believe it. Donations would come in and there'd be $1,000 from someone I didn't know, and donations from China. Holy cow!" she says.

Borges will be touring for most the year with many shows featuring label-mates Girls, Guns, and Glory's Chris Hersch (guitar), Paul Dilley (bass), and Josh Kiggans (drums) as her backing band.