Young fiddler and songwriter Jen Starsinic may have gotten her start as a fourteen year old bluegrass fiddler busking on a street corner, and she may have gotten her training at the prestigious Berklee College of Music in Boston, and she may be touring with some of the biggest roots bands in the land (David Mayfield Parade), but for her this immersion in American roots music stems from a formative experience at Clifftop, West Virginia’s Appalachian Stringband Festival. Looking for the roots of the bluegrass music she grew up playing, Jen found a different kind of music-making at Clifftop. “I discovered an older, purer, more satisfying way of experiencing music that I had never experienced before.” The kind of open collaboration and trance-like communal music making that’s the hallmark of Clifftop is at the heart of Jen’s music today, and the key to her anticipated debut album The Flood and the Fire. Jen wrote every song on the new album, liberally tapping into her love of Americana, bluegrass, country duets, folk rock, and old-school twang. On the album she combines a beautiful voice, powerful guitar, and virtuosic fiddle skills with her stunning talent as a songwriter. And yet the album doesn’t feel like anything created by your typical “singer-songwriter.” It feels more like a celebration of the way music draws people closer together, forming new friendships with each song.

A Pennsylvania native transplanted to the center of the Nashville scene, Jen is joined on The Flood and the Fire by a host of notable musician and friends from across the US. David Mayfield himself lends his vocals, and Charlie Rose and Eric Law, with whom Jen has collaborated before, bring their pedal steel and cello. Canadian banjo player Allison de Groot of the band Oh My Darling joins in on the song “Six-Foot-Three”, and Molly Tuttle, of the Tuttles with AJ Lee, brings her guitar to the song “Ragdolls”. The album was produced by fellow Berklee grad Brady Custis, and recorded in Somerville, MA at a home studio in August (in 100 degree weather with no air conditioning and no fans!). You can hear the vibrant intimacy of the moment in Jen’s music, and you can hear this is the kind of risk-taking music-making that can only be done with the help of great friends and a strong community. 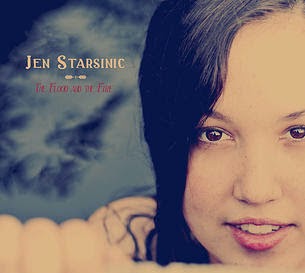 The Flood and the Fire is a beautiful mixture of modern songwriting and American roots music. The first number, “Time to Lose”, opens with folk-pop vocals reminiscent of Lisa Loeb or Kimya Dawson, but the powerhouse guitar and banjo backup propel it to something far more. The same is true of track four, “Six-Foot-Three”; it’s a reminder that the roots music need not stay stuck in the past. The Flood and the Fire shows Jen’s skill and versatility in switching musical modes. “The Only One Who Can Break a Heart” is a perfect honky-tonk tear-jerker worthy of Pasty Cline, but it is followed by the haunting “It’s a Foreign Thing”, performed with solo voice and fiddle. It’s a touching lament in a performance that brings to mind the playing of Bruce Molsky.

Oh some people are made for leaving, I learned from an early time
Some bonds are born of silver and some are sewn of twine
It’s a foreign thing, it’s a foreign thing—a love to keep me near
They come and stay but leave and fade to some forgotten year

The Flood and the Fire is a marriage of old and new, a blend of harmony and poetry, and the debut of a powerful new voice in American folk music.