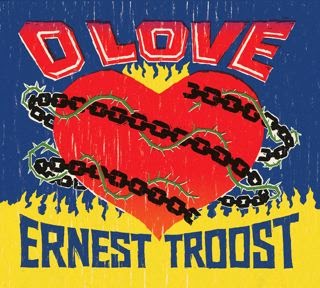 
Ernest Troost is an Emmy-award-winning film and television composer and a recipient of the prestigious Kerrville New Folk award for his songwriting. He also composed and produced two
award-winning albums of songs for Judy Collins, using the words of Emily Dickinson, Robert Browning, Gertrude Stein, and others.


With O Love, Troost turns his attention to love songs. From the tortured father/son relationship of
"Old Screen Door" or the fragmented images of the title track "O Love" to the simple grace of "Close," Troost’s songs linger in your mind like a loving memory or a terrifying nightmare. As always, Troost’s songs are rooted in character, situation, and narrative and are adroitly layered to present what FolkWorks called “a broad and colorful canvas of Americana.” A fine example of the darker side explored on this record is the first cut, the hard-rockin’ "Old Screen Door," where Troost sings, “There was blood on the handrail and some on the floor/This house was my home,but it ain’t no more/Came back for a visit just to see his face/But the room started spinnin’, and I lost my place/You try to hold it in, but it all spilled out/Yeah, it started with a whisper, but it ended with a shout."

His three previous albums of original songs have been described as what would happen if the Carter Family, Robbie Robertson, and Alfred Hitchcock wrote songs together. They’ve been a hit with critics and fans alike: "Troost's style and subject matter recall Dylan, Dave Alvin, and (especially for his concentration on life's darker side) Richard Thompson--enviable company indeed. Such comparisons are not lightly made: Every song here is a keeper." (Tom Hyslop, Blues Revue Magazine)

As Paul Zollo of Blues Railroad writes, “His work reflects Woody Guthrie’s axiom that any damn  fool can be complicated, but it takes genius to attain simplicity. It also takes a certain measure of courage in the context of modern times. His lyrics blend wistful humor, gentle resignation and the kind of enduring folk wisdom which has made great songs great for ages. These songs aren’t confection; they’re not synthesized, looped, or digitally manipulated. This is about real music,things of substance, as he expresses ideally in ‘Real Music’: ‘Real music got a mind of its own/Real music is blood and bone.’ Indeed.”