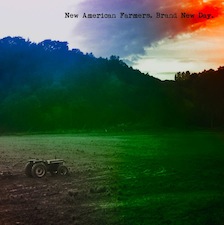 New American Farmers (Paul Knowles and Nicole Storto) are writing their manifesto of independence through music.  Much as people are moving away from corporate food supply, they see people also moving away from the corporate structure of music.  “People seek out local, in-season and chemical-free food”, says Knowles, “we would like to see people doing the same with music.”

Paul Knowles and Nicole Storto spent most of the last decade performing and recording as Mars, Arizona winning fans with their original brand of cosmic Americana. Self-reliance and trust in their sense of independence led to their new name, New American Farmers.  Hoping to create a lifestyle and philosophy for themselves and their fans, their new record, Brand New Day, reflects the band’s belief in sustainable approaches to music production and delivery.

In the past, the duo has worked with musicians such as Kenny Arnoff, David Grisman, Al Perkins and Billy Block.  Some (good) old habits are hard to break and Brand New Day includes their habit of inviting talented, high-profiled instrumentalists to “drop by”.  Gene Parsons (Byrds/Flying Burrito Brothers) plays Banjo on the opening track, while Ara Anderson (Tom Waits) reprises his role on trumpet for the song “Don’t Wait For Me Here”.

Produced by Knowles, Brand New Day was recorded live at Berkeley, CA’s Opus Studio and Fantasy Studio (with guitar parts added in their home studio a bit later).  New American Farmers dropped the bluegrass fiddle of the Mars Arizona past and on this record you’ll hear more guitar, pedal steel, the aforementioned trumpet and a string quartet.  The duo’s unique vocal style is apparent, with Knowles gruff voice playing ‘leather’ to Storto’s haunting and ethereal ‘lace’ and the duo continues to “showcase their evolution as songwriters intent on celebrating the essence of the American experience.”

“Everywhere,” opens things up with a bluegrass/Americana romp, featuring banjo by Gene Parsons. It echoes the sound of those iconic groups with its warm harmonies and upbeat message. The moody trumpet of Ara Anderson, from Tom Waits’ band, adds to the desolate feel of “Don’t Wait For Me Here,” a ballad about immigrants crossing the border hoping for of a better life and the families they leave behind. Knowles’ vocal is equal parts anticipation and sadness. A sighing slide guitar, played by Dave Walker, that recalls George Harrison’s best work gives “Brand New Day” the sound of jubilant desperation. A dad tries to put the best face on a family’s flight from the Great Recession. The emotionally complex “Sad Hotel” is a country weeper that investigates the end of a relationship, when home is just another empty room on the lost highway. Dave Zirbel’

The band shows its lighter side on “Can't Get It Out Of My Head,” the ELO hit stripped of its bombast. Knowles supplies piano and Storto croons a winning vocal supported by The Real Vocal String Quartet and Dave Zirbel’s spirited pedal steel fills. “Hypocrite” is a rocker full of ironic, self-effacing humor, but it makes a serious point about the 1%, while “How Do We Do It” is a bitter meditation on the trials of the 99% given a bare bones delivery by Knowles and his piano, played through a Space Echo tape machine.

Past lyrics from the duo hinted at global and personal cataclysms but always ended in hope and the belief for change.   New American Farmers embody that hope and Brand New Day proves that leaving the dust behind and heading to greener pastures can be a really good move.   In Knowles own words, “This is not only a band project, it’s a movement!”