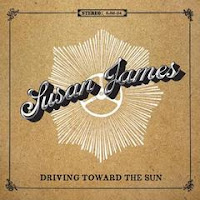 Susan James’, “Highways, Ghosts, Hearts & Home,” released in 2011, earned the praise of Ryan Adams, who tweeted about her “great songs” and killer band. Now on Driving Toward the Sun out February 19, 2013 on Megaforce/Sony RED, James teams up with producer Ryan Ulyate, producer for Tom Petty and George Harrison among others. Ulyate is just one of the many talented people who James attracts to her projects - the new album includes legendary Los Angeles drummer Don Heffington who has worked with Buddy Miller, The Jayhawks, The Wallflowers, Kathleen Edwards and more – a well as guitarist Neal Casal, who has collaborated with Adams and others over the years.

With a California hybrid of psychedelic country-folk rock, she has shared stages with Lindsey Buckingham, Sun Volt, Richard Thompson, Rufus Wainright, and Daniel Lanois just to name a few. “People might want to think this is sort of a ‘country’ album, simply because some of the songs have pedal steel. I love the sound of a good pedal steel and here, it’s used more as ‘color’ than a ‘country stamp’ on my songs,” she explains. “I naturally consider my music equal parts folk, rock, acoustic, singer-songwriter and yes, a little country, but with a specific California sound.”
“When Ryan (Ulyate) and I began, we talked about how it should be as acoustic as possible, but still have a big sound. Our aim was to get the acoustic guitar to really rock, like the guitars in the Rolling Stones Street Fighting Man or something like that. We called it 'The Wall of Intimacy.’ And every song had to have it in a way, no matter how big or small the song was. I think we achieved it, and I'm proud to share it with everyone now.”

James has been described by The Los Angeles Times as a “a master at exploring the emotional and sonic possibilities,” and Blurt Magazine noted, “excellent songwriting and an eye for musical details.” On Driving Towards The Sun, she affirms the praise with insightful and big-picture stories. “This collection of songs came to me as vivid, visual snapshots.  Each one as an emotional moment in the breakdown of a long-term relationship. And it’s more than just a breakup… the loss is deeper, and inexplicable. Perhaps you can’t quite put your finger on what was the cause of it all falling apart. And even after all that, there’s a glimpse of redemption, a new chapter.”

Not that James isn’t happily situated with a longterm marriage and 10-year old daughter.  As a quickly rising artist, in 2000, she released her third album, Fantastic Voyage, and toured globally, with a European record deal to boot. But subsequently went on a long break to raise her child. “There were certain people that thought it was a bad decision…because at that time I was really making a name for myself. I was gaining recognition steadily, getting some great shows, and was told if I step away for a time, I would be forgotten.  And yes, that's hard punishment to take for love and a child, but what I've gained creatively and personally makes me know it was absolutely the right thing.”

The title track kicks off the album with a positive message of acceptance helmed by James’ adept guitar work - and vocally sounding like a throwback to records made by Roseanne Cash and Linda Ronstadt in previous decades.

“‘Wandering’ is the only happy-go-lucky number on the album I think,” says James. “I supposed this is before everything goes pear-shaped! Just a little free-wheeling number.” And “Anniversary” is bitter resignation. “This one is the snapshot of sadness that something is seriously wrong with the relationship, and here we are on one of our most special days, and we’re arguing.  She’ll keep on trying at this point..there is still love - ‘cause any fool can see, I’ll be here come next anniversary.’”

James closes the album with “Mission Bells.” Accompanying James’ guitar, the pedal steel is languid and ghostly, as played by Eric Heywood (Sun Volt, Richard Buckner, Alejandro Escovedo). The end turns to a repetitive chant, while the lyrics are reminding the lost love to celebrate love through all it’s sorrows and joys…no matter what - “like the day our wedding was at hand."  And final redemption.
Email ThisBlogThis!Share to TwitterShare to FacebookShare to Pinterest