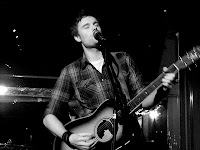 Mercury State is the brilliant second album from singer-songwriter Daniel Pearson. Set for digital release on November 19th (with a physical release to follow in January), just a year after his debut Satellites (which was praised by various press in the UK, Europe and Australia), Mercury State is a bold statement about the devastating effects of the recession and social inequality in society. Pearson has built on the success of his debut and added a lyrical maturity to his memorably melodic song writing, and the album marks him out as a singular talent in the indie rock landscape.

After the critical acclaim and radio support received by Satellites, Pearson played live dates across the UK (supporting the likes of Michael Kiwanuka, Chris Helme and Lucy Rose along the way) and also visited the USA, stopping off in New York, Washington, Nashville, Memphis, Los Angeles and Las Vegas. Returning to his native East Yorkshire, he realized the effects of the recession had taken their toll.  As he explains –

“I’d spent almost a decade playing and writing in bands, promoting shows, working as a teacher, setting up my own label and finally releasing my debut solo album. I felt like things had changed over the last couple of years– lots of my friends had lost their jobs, people in my family were badly affected and there was a real imbalance in society. There were all these stories that needed to be told - those voices and issues shaped the new songs and created a theme for the record. The changes and obstacles that all kinds of people are facing aren’t being represented all that much in music at the moment and I wanted to redress the balance in my own way.”


Despite the serious subject matter, Mercury State is far more than a one-dimensional statement. Adding to the infectious folk rock and tender acoustic songs established by Satellites, it draws on country, garage rock and blues to create a superb album that stands apart in the crowded singer-songwriter field. In keeping with the austerity theme of the songs, the album was co-produced by Pearson and regular collaborator Jeremy Platt at the latter’s home studio in the hills of the Pennines. With Pearson handling vocal, guitar and keyboard duties and Platt contributing organ, piano and basic drums, the stripped-back record was recorded live (with minimal overdubs) and mixed over 5 days in August.