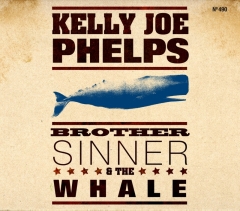 Since his debut Lead Me On in 1994, Kelly Joe Phelps has been known for singularly compelling slide-guitar music. On Brother Sinner & The Whale out August 21 on Black Hen Music, Phelps shifts to the bottleneck rather than his customary lap slide for a sound that wouldn't be out of place on a classic John Fahey or a Reverend Gary Davis record. There is a thematic shift too, but one of a more spiritual nature; his lyrics inspired by the poetry from the Book of Jonah and the vintage gospel blues of Mississippi John Hurt, with aspects of the early gospel work of Bill and Charlie Monroe thrown in for good measure.

In recent years, Phelps has been exploring musically, releasing the technically dazzling and experimental Western Bell, as well as an album with Corrine West. As with most artists this included a lot of soul searching - with a journey that wound its way to a 3-day recording session with just Steve Dawson in Vancouver. After several years of reaching boundaries with the potential of his slide, Phelps’ attention shifted from instrumental virtuosity towards an emphasis on songwriting. “I began to spend more effort thinking about my songs and not so much about the guitar because ultimately I felt that I had found all I could for myself within that sound.”
Phelps explains some of the motivation behind the new songs. “ I’d arrived at a place where I was sinking. I had to do something or my head was going to blow up or my heart would stop. When I found a way to allow myself to open up to creative impulse, this is what was staring me in the face and I did not want to say no to anything.”

Not saying ‘no’ included slide and finger-style playing. “What I always enjoyed most about playing lap-style slide was the sense of physical freedom in motion, and that so little about playing that way resembles a normal approach. That makes playing the guitar feel as though it's a completely different instrument, but it also brings with it extreme limitations; a lap-style player is playing the guitar with only one left-hand finger rather than five.”