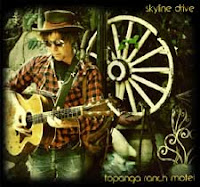 Skyline Drive is the moniker used by songsmith, Derek Thomas for his folk-Americana music project based out of Topanga Canyon, CA. Formerly a member of the CA band, 60 Watt Kid (a band that garnered rave reviews including 4 stars from Rolling Stone)--Thomas has moved from psychedelic art rock to more accessible ‘heart on the sleeve’ singer-songwriter numbers that sit side-by-side with lush filled-out ballads on his yet-to-be released record, Topanga Ranch Motel (due out on October 16th, 2012).

The core sound of Skyline Drive is collaboration between Thomas and former Ryan Adams sideman and multi-instrumentalist, Erik Kristiansen (Kristiansen recorded with Adams on the mythical 'SnowKobra' record). Thomas lends himself to lyrics, vocals, guitar and harmonica while Kristiansen focuses on pedal steel. After meeting at a show, the musicians formed a two-piece in 2011 and eventually gathered friends together to record the self-produced, Topanga Ranch Motel in Thomas’ cabin in the canyon.

Derek Thomas’ thoughtful, evocative lyrics and smoky vocals are at the forefront of the music with Kristiansen’s pedal steel weaving in and out of the stories created. The end result is a record that is heartbreakingly melancholic and brimming with soul, prompting the indie zine LA Record to claim, “Derek (Thomas) is making some awfully sad-sounding barroom folk songs that could shake the paint off your Chevy…”

The songs on the record move from introspective solo of “The Switch” to the upbeat good vibe of “Nothing Like You” and another catchy song “Bartering Line” and then to the dusty ballad of “Sam’s Saloon”. Topanga Ranch Motel is rounded out with help from Jerry Zacarias on drums, Mike Derricote (who has a co-producing credit) on bass, Carl Byron on piano Dave Bouillette on stand up bass, Jeff Young on hammond, Michael Guglielmo on drums and percussion and Leslie Stevens helping out with harmonies.

Thomas and Derricote self produced, recorded and mixed most of the album at Thomas's cabin home in Topanga Canyon using only one microphone.

Skyline Drive is already creating a buzz winning the title of “Best of-Los Angeles based Americana Music” from the popular blog, Turnstyled Junkpiled while emerging onto the Los Angeles live music scene as a band that must be heard. Topanga Ranch Motel is the vehicle for this gifted singer-songwriter who promises to make his mark not only in California, but also on the music scene as a whole.
Email ThisBlogThis!Share to TwitterShare to FacebookShare to Pinterest