Ex-Huffamoose Frontman, Craig Elkins, Prepares to Release 'I Love You' 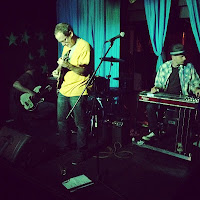 If you’re driving through the Los Angeles neighborhood of Silverlake and happen to see a man playing a child’s pink guitar on a street corner, no need to blink, that’s just Craig Elkins, setting up shop.  The former frontman of the 90’s indie band, Huffamoose (Interscope Records) says he just loves playing live, especially after discovering his daughters little nylon string guitar.  “It’s one of my few escape mechanisms.”

Craig Elkins’ latest project is entitled I Love You (due out July 10th, 2012). Known for his witty stream-of-consciousness lyrics and deep inviting voice, Elkins says I Love You is inspired by his struggles to be a functional Dad, husband and contributing member to society.  “You know, you get to be a certain age, all of these responsibilities just sort of sneak up on you and you have to try to keep your shit together but you have nowhere to hide or escape—no one to talk to.”

Self-described as a singer/songwriter geek rocker with a bit of melancholy, Elkins penned his first tune at the age of 30, the song “I Wanna Buy you a Ring” which ended up on the Huffamoose Interscope record.  Huffamoose was a Philly rock band with a cult following, a mainstage gig at Woodstock ’94, a Horde tour and three solid albums.  The single from the record We’ve Been Had Again- “Wait” charted on Billboard at Modern Rock, AAA and college radio.  The band appeared on “Late Night with Conan O’Brien” and soon after the documentary “Here Comes Huffamoose” was released.  The film follows the band as they make their way from being “The next big thing” to their ultimate dissolution. Cameron Crowe claimed the documentary as “one of the greatest rock movies ever” in Premiere magazine 2004.

Elkins had briefly retired from the music business after the demise of Huffamoose and then, upon hearing an interview with Arlo and Sarah Guthrie singing the classic Woody Guthrie song "This Land is Your Land" he was inspired.  It was then that Elkins became determined to have his then three-year-old daughter, Esme, grow up watching him do something that he truly loved. After settling in Los Angeles, CA, he recorded two projects-- one under the band name, O.L.D.  “I Live in a World” and one under the name of Craig Craigstofferson “A Final Blaze of Glory”.

His latest record, I Love You is the first project under his own name.  He assembled the band on the record with the help of good friend (bass player on the album and co-producer), Marko Fox.  Borrowing 2 players from the Counting Crows (Adam Duritz was a Huffamoose fan), Dave Immergluck plays guitar and mandolin while Charlie Gillingham is on piano and organ.  Adding Neil Larson on piano (Leonard Cohen), Pete Thomas on drums (Elvis Costello) they also had help from Jason Karaban, Steve Patt, Eno Fox, Jaimie Hovorka, Jeremy Levy with some vocal lendings from Rynne Stump.

Written by Elkins, the lyrics on I Love You find him mining cathartic and universal territory as he struggles with the feelings of isolation and disconnect. While the subject of the songs may be heavy at times, Elkins lightens things up with his quirky, sardonic wit.

In “Offing Myself” Elkins sings the bridge in a dulcet voice, “When I was a young man, I liked to drink-- I liked to turn myself inside out-- I liked to make people angry but I am not a young man anymore--I am not a young man anymore--And I got no idea how to cope”. "Most of the People" pays homage to the fact that we're all human going through the same struggle called life.  Horns soar as Elkins sings "Most of the people that you see in the street or from your car or in the store or some other place in the space that you occupy are gonna die Before you get a chance to see em again".  “Tumbleweeds” hears the mandolin lending to the country rock feel of the tune.  The song sounds buoyant but belies the desolation of the lyrics, “I nuzzle up to my child when she's sleeping and put my head on her chest to feel her breath and let the rhythm start my superficial heart”.
Craig Elkins is hoping this record connects with people of a certain age with kids, people in relationships, or those who are just struggling.  Not to leave the young people out—I have this whole other audience of younger folks who seem to really connect with my music,” Elkin says, “I think it’s because they’re relieved that the old dude up there on stage doesn’t suck.”