Americana Music Artist Tokyo Rosenthal Releases “Who Was That Man?” 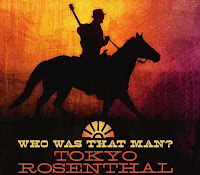 Rock & Sock Records announces the release of "Who Was That Man?", Tokyo Rosenthal's fourth album on their label. The CD features 10 tracks, all written by Rosenthal, with musical accompaniment by some of the finest musicians that Americana has to offer. This is "Toke's" first release since the critically acclaimed "Ghosts" which reached number five on the Euro Americana Chart in early 2010.
As always Tokyo's tunes are topical, reflecting politics, personal history, observations, and relationships. "Black To Blue" talks about the BP oil leak in Louisiana. "The Librarian" is the true tale of Toke's grammar school librarian turned "porn star" at age 87. "Little Old Man" tells the story of Tokyo's 18 year old cat while "Your 3rd Score" is an ode to his wife. And Toke is known for his songs about particular cities and he does it again with "San Antone". Another stand out is the story of a female boxer who rebounds from a near fatal car crash to become a 4 time world champion. It's entitled "Ann Marie" and really happened. And the title track, "Who Was That Man?", is about a classic case of mistaken identity.
Tokyo plays guitar, piano, percussion and of course vocals on the new record. He is joined by Chris Stamey on bass, Will Rigby on drums, Charlie Chamberlain, Toke's frequent touring partner, on mandolin, lead guitar and banjo, Allyn Love on pedal steel guitar, and Warren Sharp on lead guitar. Finally, backing Rosenthal on two tracks, is the fine brass section from England, Pancho Ballard And The Banditos, who add mariachi flavor rarely heard on Americana music. As on Toke's previous records, Chris Stamey both engineers the album and assists in the production.
Tokyo plans to support the release with extensive touring and live radio station visits both in the US and Europe. Besides domestic touring, Toke will be embarking on a fifth UK tour beginning September 27th in Edinburgh, Scotland. "I want to thank everyone who helped me record this record. It was quite an ambitious project and I couldn't have done it alone," said Rosenthal. "I hope everyone enjoys listening to it as much as I enjoyed recording it. And I can't wait to get out and play the songs live."
Radio promotion for "Who Was That Man" will be handled by Americana Media Media Productions in the US and Hemifran in Europe. Among other places, CDs and downloads are available at CD Baby, iTunes, Amazon.com and other locations.
For more information on "Who Was That Man?" and Tokyo Rosenthal visit: www.tokyorosenthal.com; and www.myspace.com/tokyorosenthal
Email ThisBlogThis!Share to TwitterShare to FacebookShare to Pinterest