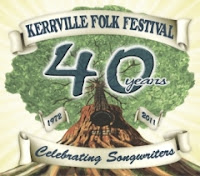 The Kerrville Folk Festival at Quiet Valley Ranch, nine miles South of the Texas Hill Country resort community of Kerrville, has announced an exciting 2011 festival schedule for its 40th annual event including Judy Collins, Asleep at the Wheel, Butch Hancock and Rebecca Loebe. Once again this legendary songwriter festival will run for 18 straight days from Thursday, May 26 through Sunday, June 12, 2011. There’s truly something for everyone at this festival, from camping, campfire jam sessions, concerts and activities for kids, “Ballad Tree” song sharing sessions, Hill Country bike rides and canoe trips on the Guadalupe to Sunday Folk Song Services, Saturday Shabbat Services and much more.
This is one musical celebration that must not be missed!
www.kerrvillefolkfestival.org
Festival Producer Dalis Allen has put together another stellar schedule to help the festival celebrate its 40th year including Judy Collins (May 28), Asleep at the Wheel (June 5), Randy Rogers & Wade Bowen (May 30), and Marcia Ball (June 12). The 2011 lineup also includes Kerrville Folk Festival newcomers such as Suzy Bogguss (May 26) The Lost Pines (May 26), 3 Penny Acre & David Glaser (June 3), MilkDrive (June 6), Colin Gilmore (June 6), Girlyman (June 10), Rodney Dillard and the Dillard Band (June 10), The Steel Wheels (June 10), Bonnie Koloc (June 10), and Will Taylor & Strings Attached (June 12). There’s also an impressive list of artists returning after a hiatus including, among others, Texas Favorite Marcia Ball (June 12), Grammy winners Cathy Fink & Marcy Marxer (May 29), Mary Gauthier (May 30), Susan Werner (May 28), Joel Mabus (May 26), Austin Klezmorim (May 27), those crazy Russians Limpopo (June 4) and Christine Lavin (June 11).

As usual, the 2011 Grassy Hill Kerrville New Folk Competition for emerging songwriters will be held on the first Saturday and Sunday of the festival (May 28th and 29th), from noon to 3:00 pm. From the 800 entries, 32 finalists have been selected to perform in this prestigious annual competition, hosted by Steve Gillette and Festival Founder Rod Kennedy. Several former New Folk finalists and winners are on this year’s festival line-up including Slaid Cleaves, Jimmy LaFave, Jonathan Byrd, Jon Brooks, Rebecca Loebe, Kim Richardson, Andy Gullahorn, Nathan Hamilton, and Hans York just to name a few. A new collaborative effort by three of our past New Folk winners, Brother Sun, consists of Joe Jencks, Greg Greenway, and Pat Wictor and will help kick off the 2011 festival on opening night in style on Thursday, May 26.

During the closing night of the 2011 Festival, Sunday, June 12, the Kerrville Folk Festival community will devote a majority of the evening concert to remembering our departed friends, family and artists. A special Memorial Concert such as this is held on each of the festival’s anniversary years. The 2011 Memorial Concert Orchestra will once again be conducted by the legendary David Amram and will feature Austin’s Will Taylor & Strings Attached. Scheduled soloists include Trout Fishing in America, Marcia Ball, Jon Vezner, and Bonnie Koloc.

Held each year since 1972, the Kerrville Folk Festival is the longest continuously running festival of its kind in North America. Over the years it has become known internationally as a Mecca for singer songwriters of varying musical styles... a place where those just beginning to develop their skills have the opportunity to play their music along side those who are masters. Emerging songwriters as well as teachers are drawn to the festival’s many learning opportunities, such as the 31st Annual Songwriters School, the Roots / Blues Guitar Workshop, Harmonica Workshop, Capo Workshops, a Music Law Panel Discussion, and the 10th Annual Professional Development Program for Teachers.

A complete festival schedule, information and tickets can be found at www.kerrvillefolkfestival.org or by calling the festival office at (830) 257- 3600. Ticket prices range from $25 to $40 depending on the particular day, although you can save from 15% to 20% by purchasing your tickets prior to May 26. Campground Access and Parking Lot fees are included in the ticket price.

The Kerrville Folk Festival is owned by the Texas Folk Music Foundation, a 501(c)3 non-profit organization that is dedicated to the support of emerging songwriters and folk music in all its forms.
Email ThisBlogThis!Share to TwitterShare to FacebookShare to Pinterest